I had so much fun with the November Etsy Beadweavers Challenge, that I have decided to jump right into the December challange, which has such an aspiring theme; Emotional Rollercoaster.  I have not done much bead embroidery, and anything I have attempted, has either been an epic design failure, or I just abandoned the concept due to a lack of creation, or patience.  However, I am DETERMINED to make a wearable piece of embroidered jewelry.

To give you a better idea of some of my embroidering challenges, please see the following: 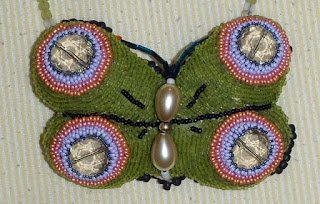 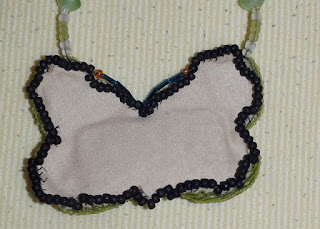 
This is a bead embriodered butterfly and while it all started out pretty well, I decided to emroider directly on the ultrasuede (MISTAKE) and then I decided to try to glue/stuff cardboard and stiff foam to the back (MISTAKE MISTAKE) and if that wasn't enough, I thought using huge 6/0 black beads to finish it off with would be just great and of course it turned out to be a ......MISTAKE.

While I can laugh at this monstrocity now, I was almost moved to tears at the failure when I was done, but then I had to admit that I had went a little rogue when I chose to skip a stiff background and just do whatever I pleased.  I also had to admit that I really loved my color choices and I bezelled the heck out of those gems and the actual embroidery is quite nice for my first attempt.  So not all was lost, at least I got plenty of practice. 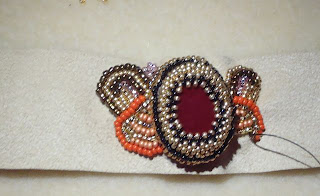 I actually started blogging about this piece and then just let it fall to the side because I was, and still am, lost as to what I can do with this piece.  Once again, I am embroidering directly on the ultrasude, which is pure tomfoolery after my last attempt, but hey, sometimes, I have to step in the pothole twice, sprain my ankle and waste time and materials before I actually get the point of using a stiff background.  Again, I was disappointed but not to tears, just really disgusted at my hardheadedness.  Again, color selection, not so bad (at first) and again, I bezelled the heck outta that cab.... 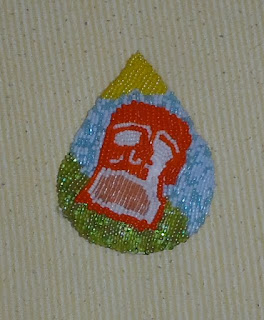 So now I am convinved that I need a stiff background (FINALLY) and I designed this two sided pendant for the December challenge, (I will spare you the explination for now since I will post my final piece with the a full explination of how I arrived at this concept).  I was all in love with this thing and was just a moving along until I looked at it and thought, this is U-G-L-Y and it is, I can't even ascertain how I arrived at this point and did not catch the full grotesqueness of this piece.  My sweet and dear husband tried his hardess to convince me that I was being too hard on myself, but I just thought, WHATEVA.... So I have started a new piece and the concept is much better and I am once again in LOVE with it and hopefully, I pray, when I sew my last stitch, I will still think my design TOTALLY ROCKS!!!! 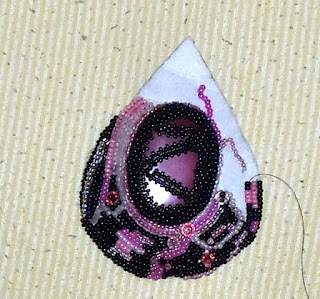 Oh and need I mention, after FULLY reading the rules on the challenge, I saw that using facial expressions should be avoided and instead color and texture should be featured...DUHHHHHH moment for me, the ever wandering loner of logic and reason.