So I purchased a new home and in between moving and starting a new job, I fell into a hopeless creative void.  I became increasingly frustrated as I attempted to work on a project but felt completely uninspired.  After writing an article about it (The Confessions of a Struggling Working Woman Trying to Create Jewelry: How Do You Do It? ) I was encouraged by many women who are in the same boat as I am.  After I settled into my home, one day, after weeks of not beading at all, I just picked up my project and I have been beading since.

The project, Enchanted Evenings (pattern on etsy.com), is a brick-stitiched necklace, and it took a long time to complete; along with the time, I had to re-start because I clipped my thread in the wrong spot and the whole thing fell apart, I was about a third of the way into it, so I was pretty upset, but not deterred.  I simply started anew and after a few more weeks, I am pleased to post the final outcome.  I love it and even though it is not fully symmetrical, I think this gives the necklace a bit more personality and lends itself to the "hand created" look.  I may tear it down and attempt to make it symmetrical, but that will have to come later.  It looks fabulous on my neck and it is amazingly light.

I will repost if I do decide to alter, but for now, this is what it looks like: 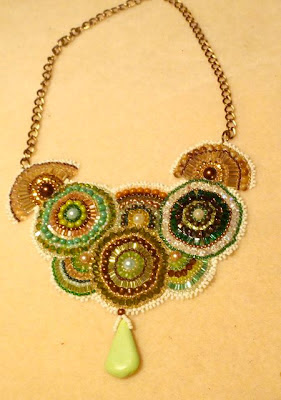 So I couldn't just let that crooked side be, it bothered me so much that I tore it down and fixed it, and I feel so much better about the necklace now. 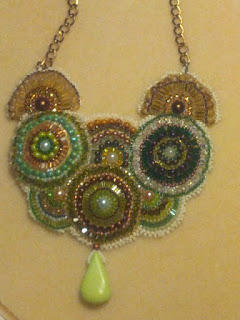